It had been over a year since I had seen my friend Andy whom I met in NZ whilst cycling the TA.  As always, he was full of enthusiasm for the forthcoming 8 days of cycling that lay ahead.  Well he had just cycled up from Manchester in preparation for the trip, so was by now pretty cycling fit.

We had decided on this trip early this year and agreed that although the weather might be hit and miss it will be before both midge and tourist season really kick in.

There was no early start today and it was around 1000hrs when we left Bazpackers and slowly sauntered out of the busy street of Inverness and over the bridge across the Beauly Firth.

I was really looking forward to this trip and as the miles ticked by as we cycled along the edge of Beauly Firth under a spring like Scottish day in late April 2018 it made all of those preparation rides during the long English winter seem well worth every bit of effort.

It was still rather fresh though and I was glad that I had packed clothing for all weathers for the trip.  It wasn’t long before the racket jacket was donned for what was to be a showery first day.

After a few miles the route took a brief off road detour and along some decent fire trails.  I was keen to see how my new rear wheel shod with a Hutchinson Override tubeless ‘Gravel’ tyre would feel.  Pssssssssssssssssssst!.   Torn side wall and latex p!ssing out everywhere.  No choice, but tyre off and tube in. 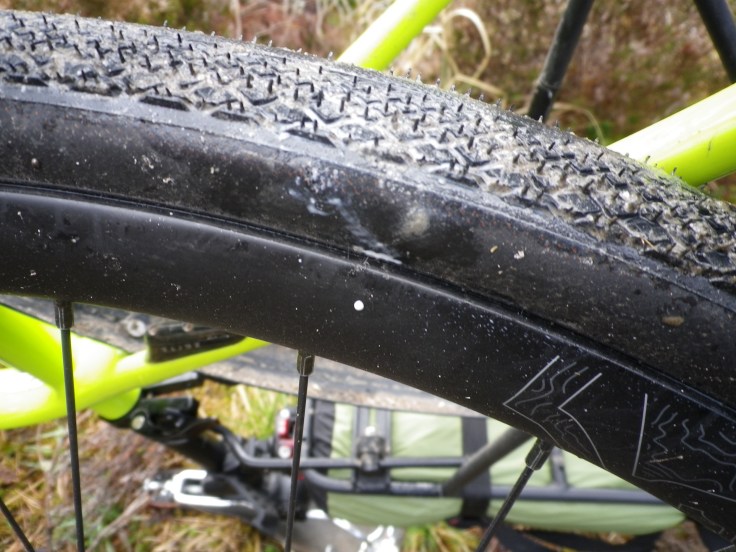 Note to self.  Don’t believe all the review !*$&£&£& you read and stick to tyres that have worked for you in the past.  In my case Conti Hardshell tyres are bomb proof and although not supple have been ultra reliable.

The sun and showers came and went as the day progressed, but the scenery was amazing and the angry moody looking skies just added to the beauty.

* If you look closely you can see Andy cycling away in the distance.

Supplies for the evening along with the customary bottle of beer were obtained from a small store located in Lochcarron.

It was during the final part of the days riding when the heavens opened and the riding took on a much more upward direction as it crossed over to Loch Kishorn.

Camp for the night was just off the road right by Loch Kishorn.  With great views over towards Bealach na Ba’ 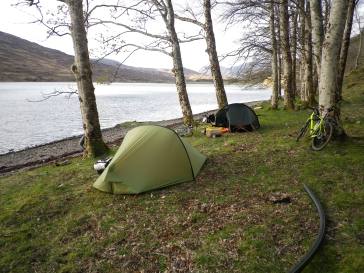 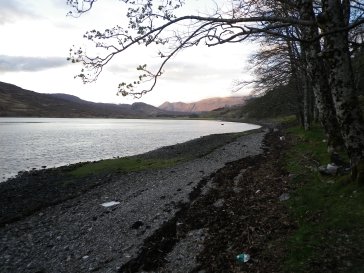 It was getting pretty chilly so it was decided a campfire would be a good idea.  Apart from collecting sticks and kindling all praise must go to Andy who was mighty persistent at getting it going.  He did cheat in the end though when he poured some petrol from his stove over it to get it roaring!

Unfortunately for me, my tent was downwind of the fire and my clothes and tent had a distinct bonfire whiff for the duration of the trip.

I can’t take credit for this as I read it on the internet, but if you get a fire going, put rock sized stones close to the fire and when they are just about too hot to hold, put them in a towel or sock and stuff them into your sleeping bag.  They hold heat for ages and it sure feels good when you climb into a nice warm sleeping bag.