A late start today as I needed to get a new rear tube and the bike shop didn’t open until 1000hrs. The pannier pantry was empty aside from a couple of melted and reconjealed biscuits. Still, they were better than nothing.

The bike shop had a sparse range, but thankfully there was one that would suffice.

The shorter day worked well as it was gone 1100hrs before I was on the road.

Just after leaving town I spotted a large hypermarket so I thought I’d head in for gas.

I have slowly realised that getting supplies for lunch between the hours of 12 and 230 is impossible as everything shuts. So you could imagine my delight when I spotted a Spar that was open!

The roads were boringly straight in places and it’s sad when you get excited to see one of these!

I reached L’Isle-Jourdain at around 6 and was impressed by the arched bridge. 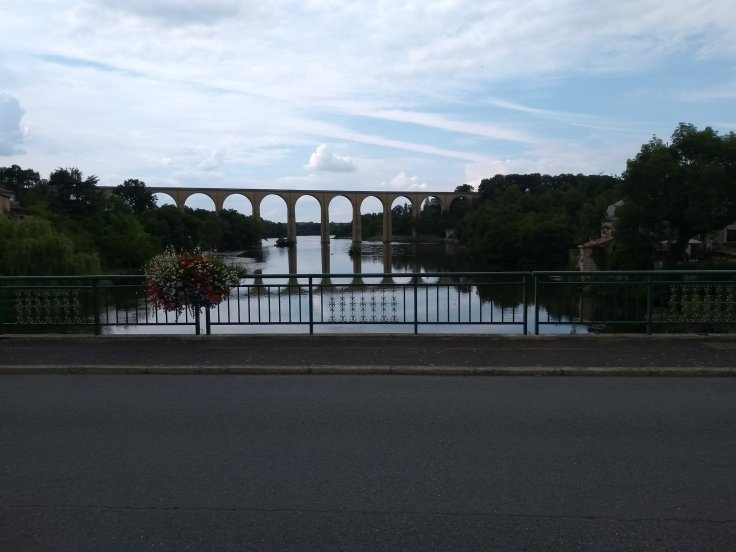 I decided that it was going to be a mega feast tonight, continental style so grabbed supplies and headed to the campsite. I actually arrived at the wrong site, but it was only 7 euros. Ok, it didn’t have a pool or bouncy castle, but it would suffice.

A whole french bread in one sitting with camembert, ham, olives .. The resulting food coma soon ensued and my adopted pal help finish off the left over pate’ (don’t tell his owner)

The owners of the campsite were going nuts watching France play a game that involves grown men kicking a ball around and then occasionally falling over and pretending to be hurt. Very strange indeed.