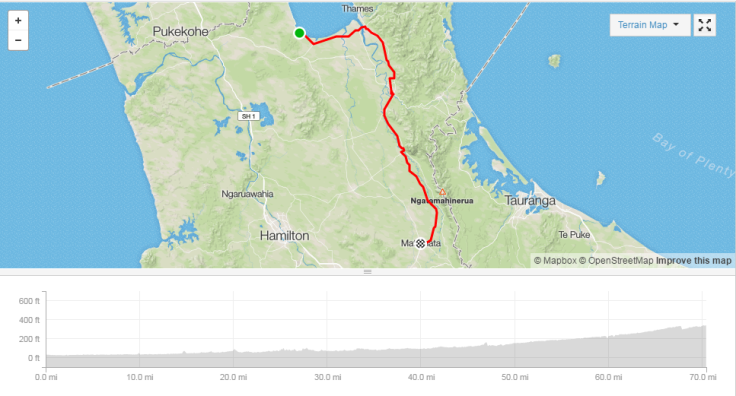 A nice easy day awaited today as the route followed the Hauraki Rail Trail.  This was a refreshing change from the previous hilly days and was a good reason to push out a few extra miles.

The first 12 miles were along busy highway 25.  Not exactly enjoyable, but there was at least a shoulder which helped keep you away from the cars.  After crossing the Waihou River

The route veered onto the gravel rail trail and the miles rolled by.

All was going well until I heard a ping.   The kink in the front wheel was evidence enough that I had broken another spoke in the front wheel.  I pushed on gently, but it wasn’t long and another one went.  This wasn’t ideal as with 2 bust spokes the wheel was very buckled and puts more tension on the remaining ones.

Closer inspection of the wheel revealed that it was the alloy spoke nipples shearing than the actual spoke breaking.  I limbered slowly along until I reached the town of Paeroa where I was able to locate a McDonalds and use their wifi connection to ring ahead to a bike shop in Matamata.  I was relieved when they said they had a wheel builder in the shop and would be happy to rebuild the wheel when I arrived.  The focus now was to riding the 40 miles to Matamata without any further spoke breakages.  Thankfully, the road turned to tarmac and I was able to press on.  I reached Matamata at 1630hrs and proceeded to the bike shop.  Matamata is associated with the Hobbit films and the set is very close by to the town.

After discussing the wheel with the mechanic it was decided that replacing all of the alloy spoke nipples with stronger brass ones was the best course of action.  It took them longer than I expected and the $160!!! bill came as a real shock, but I wasn’t in a position to argue as they had got me out of a situation and there was no alternative.   After grabbing some food and restocking my food supplies from the New World supermarket I headed out of town at ~ 1930 hrs.  Daylight was drawing out and it wasn’t long before I was cycling along the highway to Arapuni in the dark.  When I reached Arapuni at 2100 hrs I decided I would push on to another campsite 8 miles up the trail.  What I didn’t realise was that the trail turned to single track and was full or short and sharp uphill / downhill sections.  This was really tough going and it was gone 2200 hrs by the time  reached the remote Jim Barnett Reserve campsite.  Campsite was not really the correct word as it was basically a tennis court sized piece of grass in the middle of a forest.   Tent was pitched and it was head down.  I really enjoyed the night riding though as I hadn’t seen much wildlife so far and tonight I had had Possums running across the track in front of me and above my head in the trees!   It was also amazing to hears the Kiwis calling and the magical dawn chorus.